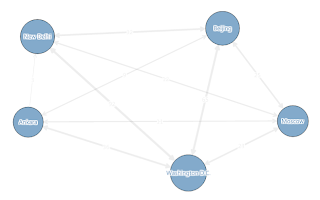 Paul Butler at Facebook recently did a really nice piece of work of displaying friendships geospatially, allowing us to see the global scale of Facebook relationships. Piggybacking off of that idea, our CEO Christopher Ahlberg thought we at Recorded Future could do something similar, and put together some visualizations looking at political relationships between countries.

Understanding shifts in the geopolitical world is not trivial. In the spirit of Paul Kedrosky's data exhaust idea - "the kinds of information we throw off as a byproduct of our actions" - here we will look at travel events of world leaders, with the theory that world leader travel is not only an indication of interest but perhaps even a leading indicator.

We used the Recorded Future News Analytics API to extract travel events on 1,000 VIPs - prominent politicians, generals, and business people from around the world - and created a data set of 350,000 events. After removing duplicate reporting, we ended up with 7,000 unique VIP trips done during 2009-2010.
Using Spotfire to visualize the trips, we can immediately see a subtle "map" emerging, very similar to the Facebook example. Washington D.C, Beijing, and a few other places stand out. The data includes both city names as well as trips starting or ending in just a country (hence the Russia node in upper right corner).

But we can go a bit deeper and beyond the map. If we use a connectedness metric to filter out only the five most connected cities in the world (again assuming the leader travel is a leading indicator of connection/importance/relevance), we find that the most important cities in the world are all rising powers like China, India, and Turkey. Not only do we find strong connections between Washington D.C. and these capitals, but also pretty much between every other pair but New Delhi and Ankara. The single most powerful connection we find, unsurprisingly, is between Washington D.C. and Beijing, as befitting the new world order.