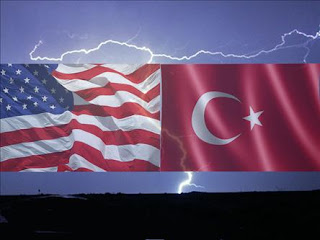 Think Islamist, and you probably imagine some un-democratic place with a stagnant, corrupt economy and women encased from head to toe in black cloth.  It is joyless and puritanical in the pejorative sense, with innate hostility to America and the West.


Dynamism probably makes you think of New York, Hong Kong, Shanghai, Rio and Mumbai — places where anything-goes-capitalism has revived after a period of recession.

A significant part of official Washington sees Erdogan as an "Islamist" in the worst sense of the word. According to U.S. State Department cables released by Wikileaks, he is a hostile force "surrounded by sycophants," including a foreign minster who wants to return Turkey to the glory days of the Ottoman Empire. In 2009, one American diplomat sent a report back to Washington that asked rhetorically, "Does all this mean that the country is becoming more focused on the Islamist world and its Muslim tradition in its foreign policy? Absolutely."


Oh dear.  Don't our diplomats get away from Ankara at the weekend? Virtually everybody else does, and they head to Istanbul.

Istanbul is the 24-hour party capital of Europe — that's right, Europe. The city has just finished a stint as European Capital of Culture, an annual European Union-funded boondoggle that shines a light on the rich cultural and nightlife of Europe's regional cities.  Previous Capitals of Culture have included drinkers' paradises like Dublin, Glasgow and Liverpool.  In 2011 it is another place where fun begins with an open bottle, the Estonian capital, Tallinn. Istanbul more than upholds the tradition — a tradition that is not very Islamist, if you think about it, which clearly people in Washington have not.

And what's this about EU funding? You thought Turkey had been refused entry to the EU? Too alien, too Islamic? No, negotiations for entry are ongoing and follow a very long, specific process.

In any case, Turkey's official entrance into the world's wealthiest economic union — the EU's GDP is larger than America's — has taken on secondary importance because existing trade with Europe is already enormous. Final numbers for 2010 are not in yet but in the middle of last year Turkey's economy was expanding at a phenomenal 11 percent.  It won't finish the year at that pace but Turkey will probably have the fastest growing economy at the western end of the Eurasian land mass for 2010.

Much of that growth comes through trade with the European Union. Fifty-four percent of Turkey's trade is with Europe. In 2007, the last year for full figures, EU members invested $16.4 billion in Turkey.  That kind of money does not flow to "Islamist" countries — especially those without oil to extract.

All that European trade is one of the reasons for Istanbul's status. Young business folk visit Turkey's largest city for work and then stay up all night to play.  The city on the Bosphorus, its hills crowned with mosques, is about as devout as that other hillside city overlooking water, San Francisco — and is much wilder.

Official Washington's blind spot over Turkey is difficult to understand.  It is the most democratic Muslim state in the Middle East, with a dynamic economy, the second largest army in NATO and a willingness to deploy it that most other NATO partners don't possess.  But from the State Department to think tanks to op-ed columns, the economic and social dynamism of Turkey since Erdogan came to power, not to mention the constitutional changes he has overseen which actually make the country more democratic, have been ignored.  You would have thought the fact that taxes have actually gone down in recent years even as the Turkish economy expanded would have made Erdogan and co welcome guests at American Enterprise Institute and Heritage Foundation seminars, as well as special guests at Republican Party functions.

Instead the dreaded "I" word seems to frame the whole discussion.  Some of this is down to lingering tensions with Israel over the 2009 invasion of Gaza and last spring's incident on the high seas when Israeli commandos stormed a Turkish ship hoping to break the Gaza blockade and nine Turks were killed. Israel's many friends in Congress and the commentariat used the Islamist word — in all its negative connotations — heavily at the time when justifying the Israeli attack.  But while Washington types did what they do best — talk loudly — Israeli trade with Turkey quietly continues. The Jewish state even sells defense equipment, including drones, to Islamist Turkey.

The drones are used primarily against Kurdish rebels in southeastern Turkey.  That may be another reason for the negative view of Turkey. The Kurds also have more friends in the U.S. Congress and the commentariat than the Turks.

I suppose there is lingering resentment in Washington against Erdogan's AK Party for voting to deny the U.S. military a platform to invade Iraq in 2003. (Although the overwhelming majority of Turks were demanding their Parliament do just that). But even the ex-military men and Bush Administration staffers who were so frustrated in February 2003 should acknowledge that it is via Turkey that some semblance of a normal economy exists in parts of Iraq, particularly in the Kurdish north.

Finally, there is the Erdogan government's relationship with Iran and Syria. It's too cozy for our foreign policy shapers and movers, although if they bothered to look at a map they might be more understanding. Syria runs adjacent to Turkey for 526 miles and Iran for 310. What does Washington want Ankara to do, not talk to their neighbors? Not engage in trade? Not keep backchannels of diplomatic communication open that might be useful to the United States some day?

Washington's inability to see Turkey for what it is rather than as the sum of all Beltway fears about Islamism is quite dangerous to American interests. America's international trade policy should embrace the Turkish economy's dynamism. Turkey should be a part of the BRIC (Brazil, Russia, India and China) conversation. Yes, Turkey still has serious human rights issues to deal with when it comes to the Kurds and its unwillingness to face up to the Armenian genocide. But all the BRIC countries have pretty serious issues on human rights, press freedom, governmental transparency, etc. and that doesn't stop realpolitik and realeconomik from ruling Washington policy discussions about the growing economic power of these economies.

It's a shame that the new Congress is so keen on re-fighting the battle over health care and generally arguing over how to get the American economy growing, otherwise I would suggest that a junket to Istanbul be arranged for the members, so they can learn what a truly dynamic city looks and feels like — and have a damn good time doing so.