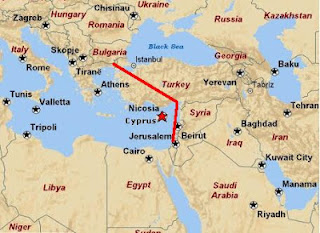 Turkish companies and western multinationals operating there are expressing an interest in purchasing gas from Israel’s Leviathan gas field, media outlets in both countries are reporting.

“The Turks are interested in buying Israeli gas, they refuse to buy Cypriot gas, but any pipeline from Israel to Turkey would run through Cyprus's exclusive economic zone,” Israel’s Haaretz reported.

An Israeli-Turkish undersea pipeline would be 600km long and cost an estimated $2 billion, the paper said.

Other reports said that, in addition to the Leviathan partners - Noble, the Delek Group and Ratio Oil Exploration - the Israeli Prime Minister's Office, Ministry of Foreign Affairs, and the Ministry of Energy and Water Resources have been informed about the contacts.

Turkish conglomerate Zorlu Group is said to be lobbying Israel to approve energy exports to Turkey.

Zorlu's reported plan is to lay an undersea pipeline from the Leviathan field 130km off Haifa to Turkey's south coast.

The conglomerate has interests in textiles, communications, energy and real estate, and is considered one of Turkey's biggest consumers of natural gas. In Israel, it owns a 25 per cent stake in Dorad Energy, which is developing a private power plant in Ashkelon.


According to Haaretz, a pipeline to Turkey has been explored by the partners over the past two years, alongside proposals to build a pipeline to Greece or Egypt or export it as liquefied natural gas.

“The Turkish option was rejected because of the deteriorating relations between the two countries. But the other options have become less attractive as well, with Greece's economic crisis worsening and the cost and engineering challenges of LNG proving difficult.”

Were Ankara to agree to pay $9 per mmbtu, selling to Turkey would be more lucrative for the Leviathan partners than selling it at $12 to $13 mmbtu as LNG to China, reports said.

Israeli website Globes cited sources as saying that uncertainties over Israeli-Turkish relations are a big question mark about such a project.

“In principle, letters of intent could be signed tomorrow on gas sales to Turkey,” an Israeli source told the online news outlet.

According to Globes, signals from Turkey, come from top government officials, although Turkish leader Recep Tayyip Erdogan has been silent on the issue. Netanyahu’s office has also declined comment.